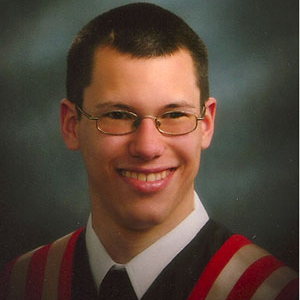 March 16th, 2001 is a day that will be etched into our memories as the day that changed our lives forever. A motor vehicle accident claimed the life of our precious 8 year old daughter, Nicole. A vibrant and loving child who had her whole life before her, and then, in an instant, gone from our lives forever. Her death filled us with a grief that we could not have imagined. The only thing that got us through that terrible time was the fact that our 10 year old son, Mark, survived the accident and needed our support and love. The accident left him with a severe Traumatic Brain Injury and he would spend the next several months undergoing various surgeries, treatments and therapies at the Alberta Children’s Hospital.

Early on into Mark’s rehabilitation, it became painfully obvious that he would be left with permanent and debilitating injuries. It was at that moment that we discussed seeking legal advice. Certainly, it was not that any sort of legal action or settlement would bring back our daughter, or, “undo” Mark’s Brain Injury. There was no amount of money that could begin to compensate for the pain and suffering associated with those types of losses. However, we had to think ahead to Mark’s future and what it might hold. There were so many unknowns. Therapies. What type? How often? For how long? Education. How much assistance would he need? What were his capabilities? Employment. Could he work? Would he need support? How much? Independent living. Was it even possible for him? What would it look like? How much support would he need? For the rest of his life, he would have special needs that we knew we could not afford.

We spoke with a number of lawyers and often ended up with a bad feeling as most of them seemed to be more interested in the potential size of the settlement, (and how much that would net for them), as opposed to how our son was doing. Ed and Tara Pipella appeared sincere in their queries as to Mark’s condition, and how we were doing as a grieving family. They were also willing to negotiate a bit when it came to determining a fee structure for their services. Of particular pertinence, was the fact that the Firm would cover all costs up front and get reimbursed only once there was a successful settlement. That was important as there would be lots of expenses involved, (assessments and testing to back up their case), and we did not have the funds to pay for those up front. What monies we had would be needed to cover the ongoing therapies which would be of immediate benefit to Mark.

Throughout the course of the next few years, Tara and Ed Pipella continued to demonstrate empathy and compassion combined with the skill and experience required to see the case come to a desirable conclusion. Nicole’s estate received a sizeable chunk of money with which we continue to honor her memory through various charities. Mark’s settlement was considerable, and at Ed and Tara’s recommendation was set up as a structured settlement. This means that every month for the rest of his life, (even if he lives to be 110), he will receive a cheque to look after his financial needs.

Mark is now transitioning from high school to life beyond. He will continue to face many challenges, frustrations and uncertainties as a result of his permanent injuries. What we do know is that he has the financial freedom to explore his options, be it continuing with various therapies, (which the province stopped funding years ago), volunteering, or post-secondary education with the required supports.

Throughout all of this, Mark has demonstrated that he has an amazingly positive attitude and a desire to succeed. This “positivity” combined with the financial means to access whatever he needs for supports, will see him achieve his goals, whatever they may be.

We could not have hoped for a better team to represent Mark and the Estate of Nicole. We were most satisfied with our experience at Pipella Law and would strongly recommend Tara Pipella and the team at Pipella Law to anyone who has the misfortune to be in a similar situation.