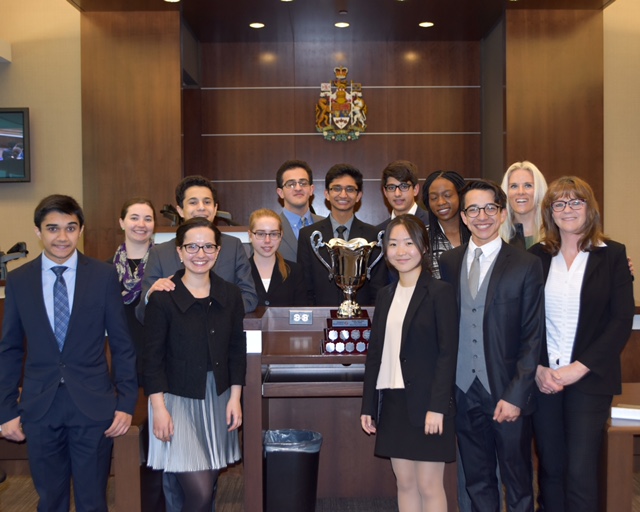 The 34th annual Calgary Law Day festivities saw approximately 4,000 people pack the Calgary courthouse for a day of exhibitions, self-guided tours, and education—all with the purpose of informing the public about different aspects of the legal system in a “fun, interactive environment.”

The most popular attraction, however, was the mock trials. The demonstration trials saw teams compete in entertaining cases involvingCinderella, Batman, and the minions of Despicable Me.

Three (3) of the teams competing in the trial tournament hailed from the prestigious Calgary private school, Webber Academy, with two of its teams competing, head-to-head, for the first-time in the finals, for the championship. Pipella Law was thrilled that their team took home the trophy.

Pipella Goes “Above and Beyond”

In a letter from Barbara Webber, Vice President Administration at Webber Academy, she wrote:

I just want to let you know it meant so much to our students (and me) that you took a full day out of your busy lives to attend the Mock Trial competition on Saturday. Your support, advice and thoughtful, encouraging words had such a positive impact on our participants. You both went above and beyond!In addition, your extensive yet concise, relevant and insightful feedback during your coaching sessions really hit the mark in preparation for the competition…several told me on Saturday they had learned so much from you.

The knowledge, enthusiasm and professionalism you demonstrated reflects extremely well on Pipella Law and your efforts with our students will never be forgotten.

With much gratitude and admiration,

Calgary Law Day is just one part of a Canada-wide event. On April 17, 1983, the Canadian Bar Association signed the Canadian Charter of Rights and Freedoms, guaranteeing fundamental protection for all Canadians—Law Day was introduced “as a means to commemorate” the Charter signing “and to educate the public about the legal system.”

Law Day events are held across Canada, offering everything including fun family events and educational activities, to free 20-minute legal consultations with a variety of practicing law professionals.

Pipella Law is proud to have been a part of Calgary Law Day 2016. Pipella Law believes that it is the right of every single Canadian to have full access to proper legal representation, but that it’s the duty of lawyers to educate the public about Canada’s justice process. Pipella Law is committed to public service, whether it’s helping our clients receive the compensation they deserve, or whether it’s helping tomorrow’s lawyers stage a legal case demonstration for fun.