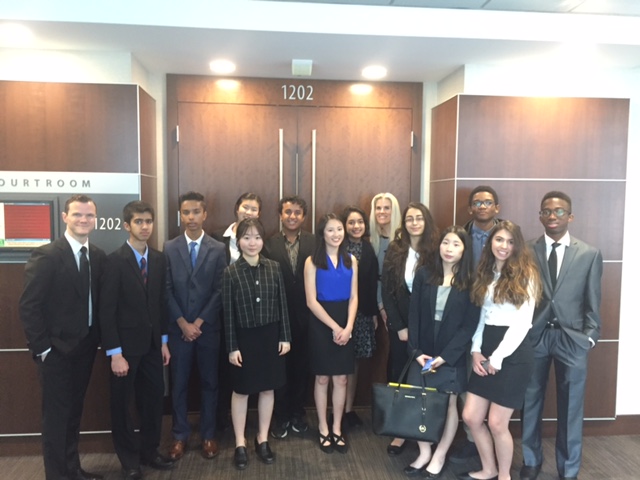 The 35th annual Calgary Law Day festivities saw large crowds pack the Calgary courthouse for a day of exhibitions, tours, and education—all with the purpose of informing the public about different aspects of the legal system.

The most popular attraction, however, was once again the mock trials. Attracting throngs of onlookers, the demonstration trials saw teams compete in entertaining scenarios involving “the cast of Despicable Me, the case of R. v. Batman, and Cinderella v. Elsa.”

Two of the teams competing in the mock trials tournament hailed from Calgary’s prestigious Webber Academy, with the judge ruling in favour of one of the teams in both of their cases representing both the Plaintiff and the Defendant in two rounds.

Calgary Law Day is just one part of a Canada-wide event. Started on April 17, 1983 by the Canadian Bar Association—one year after Queen Elizabeth II and Prime Minister Pierre Trudeau signed the Canadian Charter of Rights and Freedoms, guaranteeing fundamental protection for all Canadians—Law Day was introduced “as a means to commemorate” the Charter signing “and educate the public about the legal system.”

Law Day events are held across Canada, offering everything from the previously mentioned fun family events and educational activities, to free 20-minute legal consultations with a variety of practicing law professionals.

As strong advocates of the justice system, members of the Pipella Law team took an active part in the Calgary Law Day 2017 festivities by offering support, advice, and encouragement to the Webber Academy teams during the mock trial competition. Reflecting Pipella Law’s core value of positive outreach, members of the Pipella team spent the day coaching the students on the finer points of legal proceedings, answering questions from the students, and fostering a budding passion for justice.

Pipella Law is proud to have been a part of Calgary Law Day 2017. Pipella Law believes not only in the right of every single Canadian to have full access to proper legal representation, but that it’s the duty of lawyers to educate the public about the Canadian legal process. Pipella Law is committed to public service, whether advocating on behalf of our clients or nurturing the next generation of tireless legal defenders.