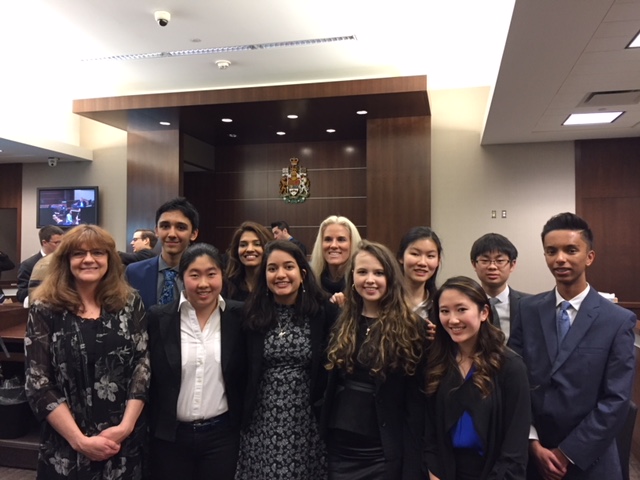 The 36th annual Calgary Law Day—a yearly event designed to inform the public about the many facets of the Canadian legal system—saw hundreds pack the Calgary Courts Centre for a free day of exhibits, activities, and education.

One of the most popular parts of Calgary’s Law Day 2018, however, was once again the mock trial tournament. Attracting throngs of onlookers, the demonstration trials featured teams competing in fun, and often themed legal proceedings, including “Alice in Wonderland”, “Harry Potter & the Potion Master’s Book,” Cinderella v. Elsa, and—perhaps most importantly—Calgary Flames v. Edmonton Oilers.

A team from Calgary’s prestigious Webber Academy, whom Pipella Law coached, made it to the tournament “finals”, but fell a single point short of its competitors from William Aberhart High.

Calgary Law Day is just one part of a Canada-wide event. Started on April 17, 1983 by the Canadian Bar Association—one year after Queen Elizabeth II and Prime Minister Pierre Trudeau signed the Canadian Charter of Rights and Freedoms, guaranteeing fundamental protection for all Canadians—Law Day was introduced “as a means to commemorate” the Charter signing “and educate the public about the legal system.” Law Day events are held across Canada.

As strong advocates of the justice system, members of the Pipella Law team took an active part in the Calgary Law Day 2018 festivities by offering support, advice, and encouragement to the Webber Academy teams during the mock trial competition. Reflecting Pipella Law’s core value of positive outreach, members of the Pipella team spent time offering their legal expertise, answering students’ questions, and sharing their strident passion for justice.

Pipella Law is proud to have been a part of Calgary Law Day 2018. Pipella Law believes not only in the right of every single Canadian to have full access to proper legal representation, but also that it’s a duty to educate the public about the Canadian legal process. Pipella Law is committed to public service, whether advocating on behalf of our clients, or nurturing the next generation of legal advocates.