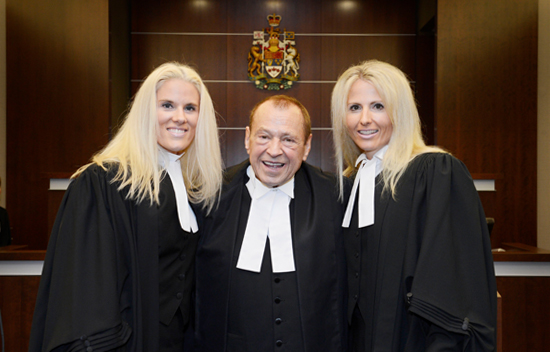 Before Kimber Pipella started work at her father’s personal injury law firm in Calgary, she was a journalist, sated her travel bug as a tour director on a cruiseline and then took off for Australia to get her law degree. And while the journalism and cruise ship experience may be a little out of the ordinary as a path to a law career, the degree outside of Canada is a growth industry — and is about to get even larger.

Pipella received her degree at Bond University in Australia that, since 2006, has graduated more than 500 Canadian law students, its largest international group at the school. Alberta is the third largest Canadian market, behind Toronto and Vancouver, says Stuart Floyd, international regional manager in Canada for Bond.

What seems to be driving these opportunities is not only the fierce competition for the few seats Canadian law schools offer to students interested in getting a degree — according to some statistics, Canadian law schools accept only 10 per cent of applicants they get — but also the growing globalization of both the corporate business law firms serve and the law firms themselves.
Bond is not the only university to see the potential in Canadian law students.

The Sandra Day O’Connor law school at Arizona State University will, this fall, launch its North American law degree. Douglas Sylvester, dean of the law school, says ASU had been meeting with firms “here and in Canada, and there is a need for cross-border lawyers who are licenced and experts in both areas of law.

“Secondly, we have been talking to individuals in Canada, and there are difficulties getting admitted to Canadian law schools. Ninety per cent of U.S. students looking at law school are admitted; in Canada, 90 per cent are refused admittance.”

There are 110 law schools in the U.S. and 40,000 to 50,000 seats for law students, the ASU law school dean says. In Canada, there are 2,300 to 2,500 seats.
Sylvester, a dual citizen of Canada and the U.S. (he was born in the U.S. to Canadian parents), says both law firms and their clients want lawyers who can practice law in both countries.
“Canadian law firms have given us guidance on what expertise they need — tax, real estate, corporate, immigration and energy.
“We are always looking for what is next, and the growth is in cross-border law.”

This move to address the increasing global presence of both law firms and business is not finished for Arizona State.
The dean says ASU will look at adding Mexico to the North American law degree. “Canada was just the natural starting point.”

Sylvester says ASU’s big pitch “is that when you graduate from this school, you are immediately able to take the U.S. bar exam in any state. And while Canada continues (to create) barriers to students with foreign law degrees, we will be standing behind our grads to help them with certification in Canada. We will have courses to help them — it is difficult to do on your own — and we have retained Canadian law firms to help us with this.”

Students with a foreign law degree must apply to Canada’s National Accreditation Committee (NCA) for certification. The NCA can make students take Canadian law course challenge exams, or additional courses. Once certified, students also need articling experience. Bond now offers all the Canadian courses the NCA requires as electives, taught by Canadian professors. Sylvester says ASU’s North American law degree will be a three-year program (as opposed to four-year law degrees elsewhere). Within 3 1/2 years, the expectation is students will be able to practice in both countries.

School fees are $40,000 US per year at ASU and $16,000 per semester at Bond (three semesters per year so you can finish in two years at a total cost of $96,000). Law degrees at top-flight Canadian universities can cost between $50,000 Cdn. to more than $80,000 total. For the first time in decades, there are new law schools in Canada — again with limited openings.

In fall 2011, Thompson Rivers University in Kamloops, B.C. opened for law (in its second year, it accepted 83 students), and Lakehead University in Thunder Bay, Ont. will open the first new law school in that province in 40 years with 55 law students this September.

Interestingly, Lee Stuesser, Lakehead’s dean of law, was a professor at Bond University prior to returning to Canada.
His new school is taking a “Main Street” rather than “Bay Street” approach to law, and is looking for students who want to practice in small-town locales.
“You do hear about everything being globalization, but small towns want their own lawyers. There is a niche and a demand.”
Lakehead had 1,000 applications for its first 55 positions — and it is committed to only accepting that number each year.

“We could double the number of Canadian law schools and there still wouldn’t be enough space for Canadian students,” which means a continued need for foreign law degrees, says Stuesser.
For Pipella, who practices personal injury law with her father, sister Tara (who received her law degree in Wales) and three other lawyers, the advantages of her Australian law degree outweigh any negatives.

She says prospective students always have to consider the expense and the possible difficulty of finding an articling position in Canada if you don’t have contacts.
But the advantages she found at Bond: friends and valuable work contacts from around the world; taking legal courses globally (she took a course in China and other international opportunities at Bond included studying at the Hague); top class teaching; and state-of-the-art equipment.
“Even though I did not know a single person Down Under, I moved across the world to the Gold Coast of Australia … I did some research on Bond and decided to go for it. It truly turned out to be some of the best years of my life.”