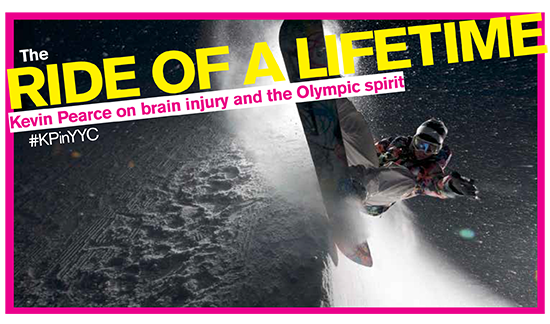 On Thursday evening, Kevin Pearce, the star of the Oscar-shortlisted documentary, “The Crash Reel,” spoke at an event hosted by the ARBI, (Association for the Rehabilitation of the Brain Injured). The private film screening was sponsored, in part, by Pipella Law.

Kevin suffered a traumatic injury doing what he loved, riding the snowboard halfpipe. Up until his injury, Kevin shared the podium with rival snowboarder, Shaun White in the year prior to the 2010 Vancouver Games.

This injury was all the more unfortunate since Kevin was in a good position to win a medal for the U.S. Olympic team. The accident on the halfpipe occurred during training in Park City, Utah. The Olympic hopeful was left with a devastating traumatic brain injury.

His story tells of the severity of brain injury, but more than anything, Kevin can be held up as a hero for completing his rehab and finding renewed joy in his life after his Olympic dream. He is now a sports commentator, motivational speakers, and advocate for brain injury and Down syndrome. Kevin’s “Love Your Brain” the campaign has been highly successful in raising awareness for these disabilities and the everyday lives of the people who live with them.

The ARBI were grateful for the opportunity to partner with Kevin, “he’s such a wonderful person, firstly, and he’s also living proof that recovery from a traumatic brain injury is possible.” Kevin is living a complete and meaningful life, but he is just one of the thousands who sustain sports or action-related traumatic brain injury.